A SOLDIER DOESN’T FIGHT BECAUSE HE HATES WHAT IS IN FRONT OF HIM , HE FIGHTS BECAUSE HE LOVES WHAT HE LEFT BEHIND .. 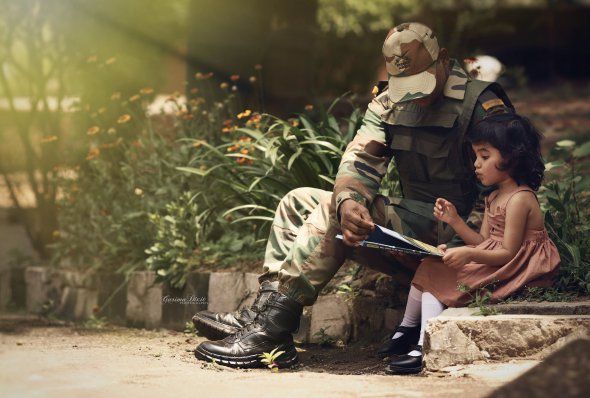 A real life story of a soldier – An army personal enters an ATM cabin in khwaja bagh area of baramulla . He withdraws one hundred rupees from it , places the note neatly in his wallet then he goes on like this for many more days to come . The guard at the ATM notices this wacky act but refrains from inquiring about the same , given the old and deep rooted fear of men in uniform .

He resists for days , few more and many more , On a day when there are few civilians around he musters the courage to ask for he believes if the army personal gets enraged with him the civilians around will rescue him from his wrath . The guard proceeds to ask : sahab why do you withdraw only 100 rupees from the ATM ? why do you trouble yourself on daily basis when you can withdraw a hefty amount that will last you for weeks ?

The army personal rubs his forehead as he looks tired; tucks his trousers properly and before he makes his way out of the cabin , tells the gaurd who is waiting for his response anxiously : “the mobile number linked to my bank account is used by my wife at home . When i withdraw cash from the ATM , she gets the message on her mobile phone , this way she comes to know that her husband is alive .

SOLDIER – HE IS WHAT THE OTHERS ARE SCARED TO BE , HE WENT WHERE OTHERS FEARED TO GO AND DID WHAT OTHER FAILED TO DO , ASKED NOTHING FROM THOSE WHO GAVE NOTHING . HE HAS SEEN THE FACE OF TERROR , FELT THE STINGING COLD OF FEAR AND ENJOYED THE SWEET TASTE OF MOMENTS LOVE ……

The best thing in the world is your ownself .